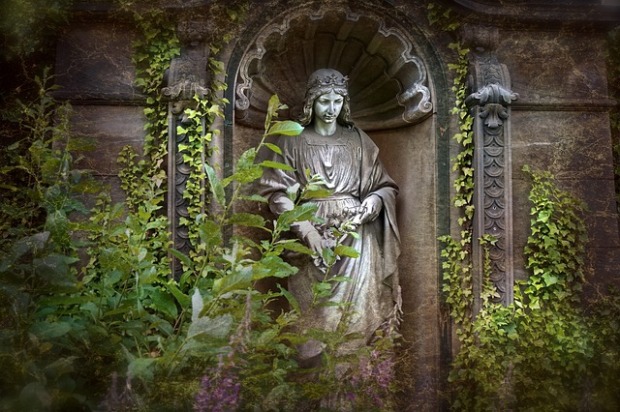 Ever since a dream I had of Michael the Archangel back in October 2015, I’ve had a recurring dream theme of seeing religious statues. Most often, these are statues of the Blessed Mother Mary and various angels. Based on the timing of these statue dreams, the main meaning/point of them is likely to strengthen my faith at a time when I feel weak.

Yesterday, I saw in my dreams a vivid image of two statues: one of a gently smiling angel comforting another, the statue of a weeping girl.

The more overt symbolism there was, of course, divine comfort, which has been an ongoing theme for me this past week alone, starting with the daily verse I received in my Bible app on Monday. I wonder if those statues were a reference to an important Biblical scene, such as the moment when Mary Magdalene weeps over the empty tomb of Jesus, where two angels greeted her. Perhaps it was only meant to be a general reference to God’s divine comfort.

Mary and the Four Archangels

During finals week this past spring semester, which promised to be my toughest round of finals ever due to it being my last semester, I started off my week with a similarly beautiful statue image. In this dream, I found, engraved into the side of an old marble building, a statue of Mother Mary carrying baby Jesus, surrounded by four archangels: Michael, Gabriel, Raphael, and Uriel. I was able to identify them by the unique items and stances they carried: Michael wielding a sword, Gabriel looking peaceful as always, Raphael standing stoically, and Uriel kneeling over an open book, looking reminiscent of an exhausted student.

Uriel’s appearance here was both intriguing and, admittedly, a bit amusing, because he looked like we all did after pulling all-nighters. According to various sources, Uriel is the archangel of wisdom. His status as such explains why he was seen with the book.

Mary and the Lily

Back in December 2016, during a time when the stress of the late semester was wearing me down, I had a series of dreams in one night that left me feeling utterly refreshed and healed when I woke up. Among receiving comfort from Michael the Archangel and talking to a kindly, fatherly man who may have been a metaphorical or literal incarnation of God the Father, I also happened upon a smiling statue of Mary.

In the statues extended hand was a beautiful white lily, which, in relation to Mary, is known as a symbol of her purity. She is known as the “white lily of the Trinity” according to web sources. The white lily is seen in the hands of Gabriel in artistic representations of his Annunciation to Mary of her status as the Mother of God.

I’m certain that I heard her gently say to me that she would assist me in my ongoing spiritual journey, and of course, those words meant a lot to me, and they still do.

Besides the aforementioned two most symbolic statue dreams, Mary and Michael have repeatedly appeared in dreams of mine related to churches and spiritual journeys.

My biggest question about these dreams is (with a grain of salt, of course), are these statues actually real? It would be amazing to say the least if I could find these in real life. But only time will tell.

5 thoughts on “My Experiences with Religious Statues in Dreams”