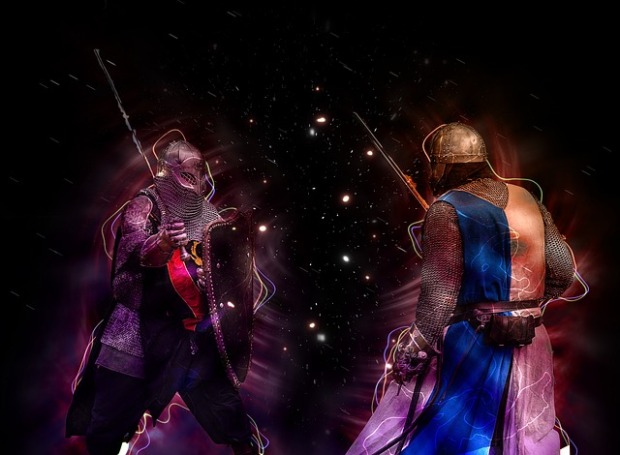 My parents’ love of Celtic music led to me becoming obsessed with the genre at a very young age. One of the songs I listened to over and over again is “Against the Wind”, the first single of Ireland’s famous singer and member of the band “Clannad”, Moya Brennan, hailed as the “First Lady of Celtic Music”.

“Against the Wind” is an upbeat, powerful Celtic rock song featuring rhythmic drums and female chanting, alongside Moya’s haunting voice.

The game is in their hands
Calling out the colour
Togetherness, their courage
Recognize the power
Make a stand before them
Old ways follows the beaten track
Against the wind
Against the wind

This song speaks of fighting against a seemingly unstoppable tide, and refusing to give up. While the lyrics do call the listener to take heed of their opposition’s unity and bravery in that unity, they nonetheless plead for the listener to take heart and press forward. This song’s music video might be inspired by Moya Brennan’s apparent desires to help children and rescue them from unsafe, uncaring circumstances.

In the music video, the drummer boy traversing the opposite path of the massive, ceaseless crowd falls to his knees, with not one passerby willing to help him; he has to help himself back to his feet and keep himself moving. Throughout the story told by “Against the Wind”‘s music video, the only people who go out of their way to help this boy are the group of dark robed, mysterious women who also serve as Moya’s chanting background singers.

Moya serves as the lone leader of this group of eerie, ominous women, helping the drummer boy onto her boat and ensuring a safe, albeit tenuous passage to an exuberant gathering where more of her attendants lie in wait. During the boat’s journey, the video cuts away to a group of silently menacing people slowly advancing towards what might be the same gathering; they are presumably the enemies of the ebony-cloaked women.

At this point in the video, one possible interpretation between the lyrics and the various groups of people presented is that one, representing modern elitists, care nothing for a lonely boy forced to wander on his own, while Moya’s group ensure that he is taken care of. If the lyrics are any hint, one message presented in the music video is that the valued tradition of taking care of orphans and lone children has been lost in the modern carelessness seen by the other adults.

When the boat arrives, Moya watches carefully from the sidelines as the drummer boy walks into the party, passing between the young female dancers twirling about, playing on his drum the entire time. In the middle of the dance floor, seated atop a miniature tower of haystacks, more of the robed women are ready to welcome him. With the help of a few of the dancers, the previously ignored drummer boy is lifted up to the top of the tower, exalted above the others in the room. In the music video, a small, relieved smile can be seen on Moya’s face as she watches this unfold.

With the drummer boy safe and their victory secured, the women present themselves as stoic and defiant when Moya sings “Nothing can stop us now! Up against the wind…old ways up against the wind…” They have ensured the boy’s safety, having rescued him from perishing out in the cold where nobody passing by offered him any assistance, and will easily continue to rescue other helpless children in the future.

The theme of child rescuing in this music video seems to be in line with Moya Brennan’s philanthropic nature, as Wikipedia has noted under her biography that she loves to help children in need around the world.

I’m glad I was able to find this music video again, because for some reason, it looks like it got deleted off of Youtube. It’s a shame, because the video really is a work of art. It was a thrill reconnecting with a vital part of my childhood, and I’ll definitely be looking into Moya Brennan’s other work!